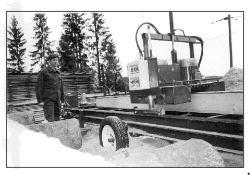 The inventor Stig Blom designed and built the first Eco saw back in 1989. The very first sawn board made it clear that this was an innovation that was remarkably interesting.

The first version of the saws which had a welded beam construction and were painted blue.

In 1998, a major production adaptation of the product took place and a decision was made to abandon beam construction with a lot of welding and direction in favor of modular construction with mainly laser-cut, bent sheet steel. This second version of the saws is painted in dark green color.

In 2012, the founder Stig Blom suffered from a serious illness and passed away in the spring of 2013.

The business was taken over by Norrgården Maskin AB in Kumla. We have previously collaborated with Stig and i.a. manufactured and assembled the electronic setworks for the Ecosågen. All construction and manufacturing takes place in Sweden.